The Inclusive Society and State Program aims to produce professionals who comprehend the changing roles of state and civil society in the twenty first century and contribute to uplift lives of the marginalized people to realize fair, open and inclusive society and state.

In April 2018, the Graduate School of International Development kicked off five new programs for regular Master course. On the preparation for this, we were concerned that a multidisciplinary program, involving most fields of social sciences, is necessary. We were also aware that a wide variety of research fields have to be considered as potentials for future students of GSID, as long as the challenges in the twenty first century also increase diversity.

We regarded social order as a key concept. Most of social sciences tackle with the questions such as how state institutions have worked and should work, why social norms give advantage to one group and disadvantage to others, how cultures and habits in the past restrict behavior of an individual in later time, and how government regulations put incentives on different stakeholders. Social order situates at the center of this diverse issues, and it is obvious that development too is inevitably constructed upon institutions, social structure, and multiple interactions therein.

While social order has a merit to cover both the spheres of state and that of civil society, it was an inevitable question what kind of social order should be expected. Since any laws, policies, norms are constructs of power relations and interactions of multiple actors, one type of social order can simultaneously give advantage to some but disadvantage to others. This discussion led us to another keyword: inclusiveness.

The concept of “inclusive” signifies the norm that development and growth must be fair and open to anyone. This concept is put emphasis also in the Sustainable Development Goals (SDGs). Moreover, inclusiveness is a key term which enlighten us for the betterment of human society in multiple ways.

First of all, there are unresolved issues related to this concept in development scenes. Contrary to the ideal, many people have been marginalized or excluded by the existing social order and legal framework for unjustifiable reasons such as class, gender, sexuality, ethnicity, race, religion and so on. On the other hand, those people and voluntary organizations have fought to improve their situations in search of better society without inequality and injustice.

Second, if we are to make a multidisciplinary platform for diverse issues in our society, and if we believe we can produce useful knowledge in this way, we need a academic platform with the sense of inclusiveness. Although academic process requires high level of rigidity, we open ourselves to diverse cases and problems in realities and multiple ideas to solve them. The inclusiveness shall contributes the enrichment of academic knowledge.

Third, the inclusiveness in the making of governmental policies and state institutions make endurable over time. Many governments and policies have been overturned because of intentional and unintentional exclusion of some interests, actors and visions. Of course perfect harmony is not a realistic imagination sometimes, but researchers, as well as government officers, need to understand the interests and strategies of all actors involved in the specific issue areas, so that a more endurable solution can be met, or at least, they can realize the reasons why it cannot be met.

Complementary to the concept of inclusiveness, we also consider the understanding of wide range of factors in empirical situation and multidimensional perspectives as pre-requisits to any analytical endeavor in social sciences.

For example, the (un)rule of law and strong/weak state capacity in developing countries have been common concerns in many academic disciplines, but not fully understood so far. Law has assumed to be contributory to fairness, unbiasedness and protection of human rights, and thus helping human society be more inclusive. while this assumption has been realized in some countries, it has not been the case of many developing countries. Sometimes legal documents are not written in language of each ethnic group. Some feel physical or cognitive obstacle to reach judicial courts. Or scarce financial resources demotivate judges and polices from observing laws. If researchers fail to understand these empirical factors, or lack careful attention to any other diverse contexts, any legal reforms may work contradictory to its original visions.

This program trains students to critically and deeply analyze such dynamic processes of dominance, resistance and cooperation over construction of better social order, legal frameworks and state policies, with the interdisciplinary perspectives which includes law, political science, sociology, anthropology and history. 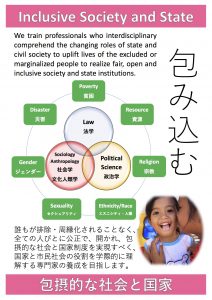